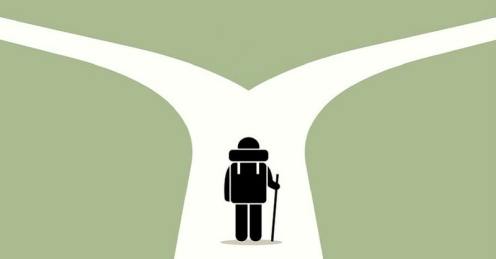 Do you feel that you struggle to make decisions?  Do you feel defeated trying to choose a cereal in the supermarket, or tormented about whether to attend your niece’s wedding?  We make so many decisions daily, and life is scattered with huge life changing decisions with a myriad of implications.  Popping into Starbucks for a coffee alone offers you no less that 80,000 ways to take your caffeine, or maybe no caffeine, or milk, full fat, semi or skimmed, or soya, latte or americano, tall or grande…..you get the picture (!) So how do we cope with making decisions.  Or do we not?  Or is not making a decision actually making a decision?

First of all in the group we looked at what is it about making a decision that can feel difficult? People said not knowing the outcome, the fear that if it goes wrong it’s all your fault.  People also said that a history of making bad decisions makes it hard to trust yourself and so decreases confidence.  Overthinking and rumination over the potential ‘what if’s’ of a decision provokes anxiety and procrastination.  And a final difficulty cited is that once a decision has been made you may then be tied to the consequences of it, and that is scary.

So, the second part of our discussion was around responsibility-the level at which we are able to accept responsibility probably promotes our decision making abilities.

We had a think about what these two elements look like: Not taking any responsibility manifests in procrastination, always letting others decide, not paying bills, not contributing, not thinking of others, avoidance, not willing to look at oneself, unhealthy coping mechanisms [to escape e.g. alcohol or sleep], and blaming others.  Taking all the responsibility conversely involves always making decisions for others, taking the blame for everything, putting others before self, only seeing the negative in yourself, dis empowering others, not trusting others which can lead to micromanagement and bullying. Another direction of over responsibility is taking so much care of others that it can lead to obsessive compulsive behaviours trying to protect everything.

The question was posed to the group ‘Do you actually know what decision is best to make, but fear and doubt are what comes in creating confusion and reluctance to decide’.  Interestingly people mostly did seem to concur that they did in fact know what to do, so it isn’t the not knowing that creates a barrier to deciding but rather the implications of the made decisions.  People did chat too that as well as not making or avoiding decisions, sometimes they just make very impulsive choices, we talked about whether at times these were self-sabotaging behaviours.

There are some things we can do to help in combating decision fatigue.  A study of an Israeli prison parole board showed that prisoners appearing earlier in the day were more likely to receive parole for no other reason than by the end of the day the judges were tired and less likely to have the mental energy to make a decision regarding a prisoner’s release.  This study is cited in the New York Times in an article about decision fatigue.

It is no different for us, when we are tired, hungry or it’s the end of the day having already made thousands of decisions, it becomes more difficult to decide.  So sometimes putting an important decision off until the morning may be wise, and planning and organising can significantly reduce the pressure of having to make extra decisions.

Author: A life worth living

One thought on “Decision making and responsibility”