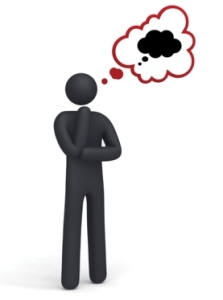 Past thoughts or memories

Controlling thoughts, other voices that come from our past

Today in the group we explored some of these thoughts which can really affect our mood and hold us back from doing things.  We used our ‘ No More stinkin’ Thinkin’ tool and considered how we may start to think differently about a problematic thought, e.g. “I’m too old to be successful”, could we think instead “Maybe I am not too old to try something new”?  An even better thought may be “Now that I’m older I know myself better and know my limitations, I am much more likely to be successful in what I want to try.”  Group members had a go at working with some difficult thoughts, which is quite tough, especially if you heard a critical voice as a child which continued to be resident in your mind as an adult.  The first task is to really identify the thought or belief, the second step is to give yourself permission to believe that something more positive may actually be true.

You may find the following article interesting from The Guardian, by John-Paul Flintoff http://bit.ly/1uF3eaj

How to silence negative thinking
It is all too easy to fall into unhealthy patterns of thought, but visualising your inner critic can help.  Worry, negative thoughts, inner critic; There are different patterns of negative thoughts, but addressing this problem can be helped by confronting your inner critic.
Psychologists use the term “automatic negative thoughts” to describe the ideas that pop into our heads uninvited, like burglars, and leave behind a mess of uncomfortable emotions. In the 1960s, one of the founders of cognitive therapy, Aaron Beck, concluded that ANTs sabotage our best self, and lead to a vicious circle of misery: creating a general mindset that is variously unhappy or anxious or angry (take your pick) and which is (therefore) all the more likely to generate new ANTs. We get stuck in the same old neural pathways, having the same negative thoughts again and again.

Happily, increasing evidence of the brain’s plasticity suggests that we can disrupt this poisonous cycle and put in place something much more healthy. Brains don’t stop developing in childhood, as was previously believed: studies of London cabbies doing “the knowledge” of the city’s layout have found a redistribution of grey matter, and individuals who sustained massive brain damage have been shown to develop workarounds using undamaged parts. So we can learn to stop our thoughts travelling down the well-trodden neural pathways by creating entirely new ones.

The first step is to become aware of your automatic negative thoughts – and for me, anyway, that’s much easier (and more fun, actually) if I personify the inner critic, with a sketch, and give him/her a voice. By doing that, I externalise the thoughts: they’re no longer coming from me. And it seems I’m not the only one who likes working that way.

Personal negativity
I don’t know what yours is like, but I imagine my inner critic as small with a shaved head, and dark shadows under his bulging eyes. He generally looks worried, and avoids eye contact, but sometimes he stares boldly, his face contorted into a disbelieving sneer.

The description is based on drawings I’ve made of him. And having determined his appearance, I gave him a name: Uriah, because like the Dickens character my inner critic is “ever so ‘umble”.

He’s determined to keep me that way, too. Whenever I’m about to do something exciting – that’s when Uriah pops up. And in the privacy of my own head he says things like this: You’re not ready. Nobody wants that anyway. You’re too old. It’s not going to make any difference. Nobody is listening to you. You will never be successful. You don’t work hard enough. It is painful.

I knew nothing about my inner critic until a couple of years ago, when a friend was training as a life coach, and asked me to be her guinea pig. At the time, I thought life coaching sounded a bit odd and – well, Californian. I didn’t expect much. But I trusted my friend, and found the experience so helpful that I decided to train as a life coach myself – not a therapist, any more than a football coach is a therapist, but a conversational partner who uses insights from psychology occasionally to be supportive and challenging at the same time. (The company that trained us both, Coaches Training Institute, did indeed turn out to be Californian.)

Until then I had assumed – like most people, it seems – that when a negative thought popped into my head it was just an accurate reflection of the way things really are. But I’ve since come to see that the inner critic only ever promotes a point of view. And there’s always another point of view available if we choose to look for it.

Finding your inner critic
Not long ago, I was running a workshop on creativity for a group of about 30 adults who, for a variety of reasons, had lost the free spirit of creativity they’d had as children.

So I decided to show them my drawing of Uriah, with speech bubbles coming out of his head to show the specific, shameful thoughts that trouble me. I have to tell you that it made me extremely uncomfortable to hold up that picture in front of these strangers, and to read out those horrible specimens of self-criticism. (“Tell them I’ll never be successful! I’m too old! I can’t do that!”)

But as I did it, I looked around at the faces before me and I realised that they weren’t especially interested in my inner critic – they were much more interested in uncovering their own. (What’s more, my own anxiety about this shameful secret substantially disappeared as soon as the words left my mouth.)

So, having shared my own self-critical thoughts, I invited everybody else to take a pen and paper and write down the kinds of thoughts that pop into their own heads.

Then I asked them to imagine about the kind of person who might say those mean-spirited things, and to draw him, or her. (It doesn’t have to be a “good” drawing.) Some drew a picture of their old headteacher, others drew a parent, or somebody at work. I asked them to give the character a name, and to draw speech bubbles containing all those horrid sentences.

When working with people like this, I ask them to notice, in future, whenever these characters come into their heads. To be really curious. How often does it happen? What’s the trigger? What emotional state does it leave you in? How strong is that emotional state, from one (low) to 10 (high)?

And after noticing, I invite them to argue back with their inner critic. “If it helps,” I might say, “think of somebody you admire for whatever reason, and imagine that person is beside you now, offering support. If they were arguing for you, what might they say?”

Answers don’t always come easily. Some people are just too afraid of the negative thoughts. But that usually passes. Others might think the exercise is silly. So I lay it on thick about the science: psychologists, automatic negative thoughts, and neural plasticity. But either way, it basically comes down to the same thing: moving beyond the negative chatter in your head, and putting your inner critic back inside his box. And as many coaches, and cognitive behavioural therapists, can confirm – getting acquainted with your inner critic can be remarkably helpful.

Categories
We all have our own particular set of automatic negative thoughts, but they tend to fall into broadly similar categories.

Black and white thinking, with no grey areas: “I’ve completely failed.” “Everyone else can do it”.
Mind reading other people:“They think I’m boring.” “People must think I’m stupid.”
Crystal-ball gazing: “There’s no point in trying. It won’t work.”
Over-generalisation: “This relationship ended, so I won’t ever meet anybody.”
Disqualifying the positive: “I may be a good mother, but anybody can do that.”
Drama queen: “I can’t find my purse. I’m going senile.”
Unrealistic expectations: “I should keep going, even when I’m tired.”
Name calling, to self an others: “Silly fool.”
Self-blame: “She looks cross. It must be my fault.”
Catastrophising: “Nothing is ever going to work for me.”

John-Paul Flintoff is the author of How To Change The World, published by Macmillan.